By chogministries
Posted March 4, 2019
In All Church of God, Southeast
Alabama Pastor Installed as President of Korean Seminary2019-03-042019-03-04https://www.jesusisthesubject.org/wp-content/uploads/2016/07/ChogLogo-Light.svgChurch of God Ministrieshttps://www.jesusisthesubject.org/wp-content/uploads/2016/07/ChogLogo-Light.svg200px200px 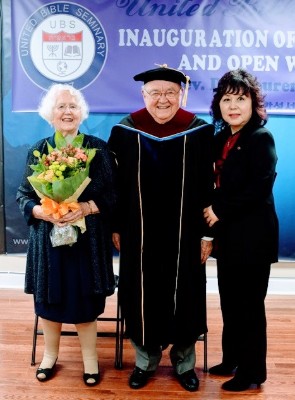 In March 1965, Loren and Elouise Sutton, with their four children, were commissioned to plant a Church of God congregation in Opelika, Alabama. They established Airview Church of God where he served for a season but returned later in life for another season of pastoral leadership. In the six decades since his call to ministry, Sutton has continued to preach as a pastor, evangelist, youth speaker and, for a season, he served as the southeast recruitment and development representative for Anderson University. The most exciting turn of events in Sutton’s sixty-five-year ministry began to take shape in the spring of 2018, however, which ultimately led him to become the president of a Korean seminary.

In 1958, Loren Sutton became a “come-outer”—a term used historically in the Church of God to describe one who had left denominationalism to embrace God’s one universal church. He and his wife had been married for two years and were living in southern Alabama, believing that farming would be their life’s work. But their intention to farm changed abruptly in April that year when God intervened by calling Loren to pastoral ministry.

Serving first as associate minister at Birmingham’s Bethel Church of God, he was later called as pastor of the Townley, Alabama, Church of God congregation. He has also pastored Churches of God in Jasper and Lanett, both in Alabama.

In the spring of 2018, Young and Hannah Kim, believers of Korean descent, became part of the Airview congregation in Opelika. They soon asked if they could hold Korean language services in the Airview Church of God building. They were also granted permission to place street-front signage, inviting Koreans with English language skills to their morning worship service and announcing a Korean language service in the afternoon.

The Kims also introduced Internet technology to translate Airview’s English services into Korean to be broadcast on YouTube and Facebook.

Sadly, the Kim’s efforts to establish a Korean language worship service in Opelika were not successful. After a couple months, the couple left for Atlanta, Georgia. The story was not over, however, as they reconnected with Sutton in June 2018, requesting to visit with him in Opelika.

During their conversation, the Kims explained that the message of the Church of God through Sutton’s preaching had reached their church leaders in the United States and Korea. After several hours of discussion, Pastor Loren Sutton was offered the presidency of United Bible Seminary, an independent seminary in Atlanta, Georgia, serving Korean Christians worldwide.

Before the seminary offer was accepted, an understanding was agreed upon that the Suttons would remain as pastors of Airview Church of God. Sutton would travel to Atlanta twice a month to teach and preach to faculty and students and give leadership to the seminary.

Worship and installation services were held on November 4, 2018. With more than fifty Korean church leaders in attendance, Sutton was first granted an honorary doctor of divinity and then installed as president of United Bible Seminary.

At the conclusion of the installation service, dinner was served in honor of their new president and his wife. An invitation was also extended to the Suttons to make a visit to Korea for a preaching mission. The dates are to be determined.

God is using Loren Sutton, among others, to reach Koreans around the world with the truth of the gospel, the hope of Jesus, and the message of the Church of God.

May the Bridges I Study Today Light the Way for a Better Tomorrow!All Church of God
Oklahoma Church Bursting at Seams Sees 2020 Vision ClearlyAll Church of God, Central, Give Life