A Wake-Up Call: CHOG Unites in Prayer for Persecuted Church

By chogministries
Posted October 31, 2014
In All Church of God, Global Strategy
A Wake-Up Call: CHOG Unites in Prayer for Persecuted Church2014-10-312014-10-31https://www.jesusisthesubject.org/wp-content/uploads/2016/07/ChogLogo-Light.svgChurch of God Ministrieshttps://www.jesusisthesubject.org/wp-content/uploads/2016/07/ChogLogo-Light.svg200px200px 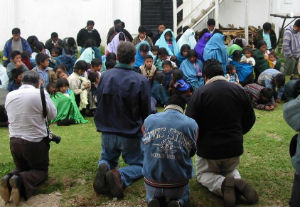 Twenty-five months. That’s how long Saeed Abedini has been behind bars in Iran for his faith in Jesus Christ. Torture, unspeakable living conditions, and an inhumane lack of medical treatment have marked the drawn-out experience of the thirty-four-year-old pastor who, as of late, has exemplified the horror of modern Christian persecution. On Sunday, November 9, Church of God congregations around the world will unite with other believers to pray for the global persecuted church. In advance of this vital initiative, Church of God missionaries have weighed in on the extent and gravity of persecution in the world today.

One Church of God missionary in a tumultuous part of the world recalls the many times she has witnessed, or experienced firsthand, persecution. Ruth Lyons remembers one story of a man whose son was held at gunpoint until he would deny Christ. Though he was not killed, he was banished from his family. Not long after this traumatic event, his wife divorced him and kicked the son out of the home, saying, “Take this idiot. He is no good to anyone now.” This same son, dismissed as worthless, serves as a worship leader today.

While serving Christ in ex-Soviet Central Asia, Ruth herself was captured by intelligence officials who warned her, “We have ways of making you talk.” Though under arrest, she remained faithful to the Lord and drew strength from the words of Matthew 10:19–20, “But when they arrest you, do not worry about what to say or how to say it. At that time you will be given what to say, for it will not be you speaking, but the Spirit…” (NIV). Thank God for her continued protection, which she never takes for granted.

“On April 18, 2007,” she explains, “three Christian men who worked for a Christian publisher and Bible distribution company were attacked, tortured, and brutally stabbed to death by five young local male Muslim assailants. Within a few days, the terrorist police visited me and informed me that the name of our ministry was on the hit list found on computers they had confiscated in those assailants’ homes.”

Far from the media spotlight on ISIS crises and Islamic extremism, pockets of terrible persecution also persist. David and Barbara Miller, regional directors for Church of God Missions in Latin America, have prayed with many locals who have faced serious persecution. One hotbed for Christian persecution is Chiapas, Mexico. There, fifty thousand Christians have 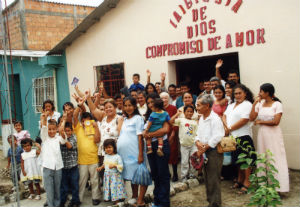 been forced from their homes and into a life of grave poverty by village chieftans called caciques. “If these Christians renounce Jesus, as the caciques demand, they can avoid such a fate,” David explains. “I have not heard of anyone ever doing that.

Instead, they ask believers to pray that they would remain faithful to the Lord through the persecution. Angel and Jeanet Pinto are two examples. They simply will not let persecution keep their ministry down. The Pintos, who have pastored Pledge to Love Church of God for twenty-seven years, have suffered in the crosshairs of violence spawned by drug trafficking and guerilla warfare. September saw the latest killing, which took the life of a four-year-old member of the church’s children’s ministry.

“The motive for that senseless killing remains unclear,” David Miller reports. “But when Uwaldo Narvaez was assassinated, everyone knew who killed him and why.”

“The Pintos introduced Uwaldo to Christ about 15 years ago,” David continues. “As a result, he decided to stop farming coca leaf, the raw material used to make cocaine. He switched to alternative crops and began convincing some of his neighbors to do the same. His courageous stance infuriated guerrilla groups, who depend on cocaine trafficking to finance their war against the government. One 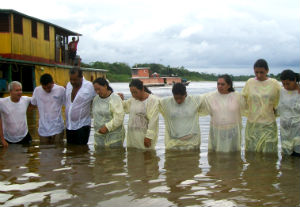 evening heavily armed men assassinated Uwaldo on an isolated jungle path. They threatened his family with more killings should they report the homicide to authorities. Mrs. Teresa Narvaez was forced to abandon the farm and go into hiding with her seven young children.”

Though initially consumed with rage to avenge his father’s death, young Gabriel Narvaez ultimately gave his heart to Christ. Similar to many stories of those who have endured persecution for their faith in Christ, Narvaez’s story doesn’t end at conversion. “Today he is and active evangelist and church planter,” David says.

Ruth Lyons reflects on the strength needed to face Christian persecution. “Many Christians in the West need to learn more about sharing their faith and being rejected and the endurance needed when it is tough,” she says. “Firm belief, that the divine will and counsel are right, calms the spirit. This promise gives me the strength I need.”

David Miller leaves us with a challenge. “Will you pray for persecuted Christians this November? They tell us they see God work when his people pray. They, of all people, ought to know.”

The International Day of Prayer for the Persecuted Church is November 9, 2014. For more information, visit www.idop.org. For a related story released by Church of God missions, read this gripping account of Christian persecution in Pakistan.