A Visit with the Church of God in Hungary Joe Cookston (far left) prays at the commissioning of the plant.

Joe Cookston has worn a variety of hats in the Church of God in his lifetime of ministry. Currently he’s most well-known across the Movement for his leadership of CARE—the Clergy Advocacy and Resource Effort. But he’s also served faithfully in a number of important areas, including the local church. One role may not be as familiar to many in the Movement, and that is the position he holds as nonresident board member for the Church of God Hungary. In August and September, Joe and his wife Merry visited Hungary, a place that has become quite familiar and beloved by the ministry duo. Joe and Merry have since returned from the encouraging experience, blessed to report on the opportunities God is opening up in the Eastern European nation.

In 2006, while on staff at Salem Church of God in Clayton, Ohio, Joe was pursuing a doctoral research project through Trinity Evangelical Divinity School. The research centered on non-formal education approaches for pastoral training in emerging countries after the fall of the Iron Curtain. While on a sabbatical from Salem, Joe and Merry went for the first time to Eastern Europe. The plan was to visit six Eastern European ministry training centers to observe and learn how the Protestant church equipped pastoral leadership with the absence of formal training institutions. In a region where networking was limited after the fall of the Iron Curtain, the prospect was intriguing and the process fascinating for Joe. It was during this experience that Joe first became acquainted with Church of God Hungary.

A few years later, Three Worlds, our Church of God missionary network in Europe and the Middle East, invited Greg Wiens of Healthy Growing Churches to go and perform an assessment with the leadership of Church of God Hungary. At the same time, Greg was also conducting similar assessments with the Salem staff, where Joe was executive pastor. After working with Joe at Salem, Greg asked if he and Merry would walk alongside the board of Church of God Hungary, helping to build sustaining infrastructure, encourage the leadership, and build relationships. 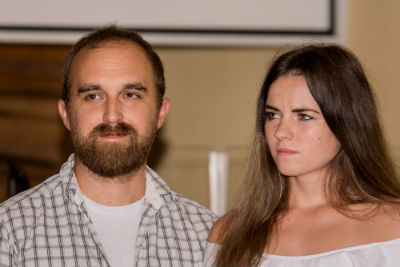 Joe and Merry would spend three months living in the town of Budakalász, home to a small, but thriving Church of God congregation. There they built relationships with the leaders of the church, held marriage enrichment group sessions, met with the newly constructed board, and generally lived out the principles of Romans 12:13—rejoicing with those who rejoice, weeping with those who weep. Joe refers to this vitally important aspect of their walk with Church of God Hungary as a “ministry of presence.”

“Visitors from the United States sometimes come, offer helpful advice, and then leave,” Joe reflects. “But the ministry of presence matters. Friendship, encouragement, walking alongside brothers and sisters—that’s how transformation happens. We were fortunate to have opportunity to live among these folks for an extended period of time.”

Joe Cookston has lived out that principle with intentionality and consistency as he’s maintained these relationships. Regular conversation on the phone, online, and periodically in-person, have proved his love for the people and the leaders of Church of God Hungary. So, when the opportunity came again this year for increased investment, he had to take it.

“We preached in the churches, met with the leaders, and continued to build relationships over meals and casual daily conversation,” Joe recounts. “We led a three-day family retreat on evangelism, collaboratively constructed a church planting covenant, conducted a one-day board training and visioning session. But one of the most exciting things we did was take part in the commissioning of a new church plant!”

Kiss (pronounced Kish) Peter, with the family name written first in Hungarian style, is the lead pastor of Church of God Hungary. The church has grown and strengthened to the point that it was ready to multiply. Grateful for support from so many partners, including Three Worlds; Healthy Growing Churches; Fairfax Community Church; First Church of God in St. Joseph, Michigan; and Parkgate Community Church in Pasadena, Texas; Church of God Hungary is well-positioned for a bright future. Facilities are multi-functional, the congregational makeup spans the spectrum of ages, and the talented worship teams include teens and young adults in their twenties. Not only did the church just commission a new plant, but they’re already looking to do another one! 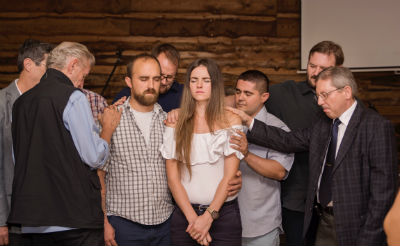 Prayer of commissioning for the church plant.

“The church has a strong commitment to church planting,” Joe explains. “The past year, it has been working with a team of six people to plant a church. The amazing part of this is that two of the team members were formerly atheist and into dark magic. The new church plant pastor really got to know them and built friendships. The two began asking questions and now they are vibrant Christians. While we were there, we attended the wedding of one of the young couples.”

The week following the commissioning could have taken a slightly more somber tone. After all, the church had just released six vibrant and gifted young adults into the Lord’s service. But, God had other plans, and it was exactly the kind of affirmation the congregation and its pastor needed to keep pressing on. The Sunday after the commissioning, three new families showed up!

“I am overjoyed to see the coming together of a people of vision,” Joe reflects. “May we as the Church of God in the United States and Canada continue to pray for the work here, for the people here. This is a relatively unchurched society, and most pastors of the evangelical churches here are part-time. That can lead to a lot of stress on their families. Pray for the continued development of new leadership. It’s already begun to happen. May that leadership development increase more and more.”

Learn more about the ministry of the Church of God around the world at www.chogglobal.org.