A Servant’s Legacy: Movement Reflects on the Life of Benny Santiago

By chogministries
Posted February 2, 2022
In All Church of God, Chaplain Ministries, CHOG, Great Lakes, Northeast
A Servant’s Legacy: Movement Reflects on the Life of Benny Santiago2022-02-022022-02-02https://www.jesusisthesubject.org/wp-content/uploads/2016/07/ChogLogo-Light.svgChurch of God Ministrieshttps://www.jesusisthesubject.org/wp-content/uploads/2022/02/benny_santiago_collage_feb2022_adj.jpg200px200px

Years of health complications ceased for Rev. Benjamin (Benny) Santiago on January 10, 2022, when he went home to be with the Lord. Some things will never cease, however; the lasting influence and impact of Benny Santiago on several sectors of society remain—especially on the Church of God and the local community he called home for most of his life. From Anderson, Indiana, to New York and beyond, this man’s unique mark on the Movement has stirred numerous reflections among those who most keenly feel his absence today.

Benny’s obituary states that he “was born in Santurce, Puerto Rico, to Claudina Figueroa Rivera, December 17, 1952. He moved to New York City at the age of five. He grew up in the streets of Brooklyn, New York, becoming involved with gang activity and drug abuse. He enlisted in the United States Marine Corps in 1970. On Good Friday, 1979 he was introduced to Jesus Christ by the late Rev. Dr. Hattie Downer. From that day forward, he dedicated the rest of his life to telling everyone he met about the saving power of Jesus.”

And that’s exactly what Benny Santiago did—in word and deed (numerous deeds), he spoke and showed the love of Jesus. Benny didn’t wait for a clarion call to vocational ministry to share with everyone everywhere what Christ had done in his life. Long before he became an ordained minister in the Church of God, he involved himself heavily in prison ministry—first in New York, and later in east-central Indiana. By the time he got married and moved to Indiana, he’d already graduated from a Bible institute. Through the years, he championed the cause of at-risk youth, offering excellence in mentoring efforts and initiatives. One of the most notable contributions Benny made in ministry came in 1991 when he founded the chaplaincy program for the sheriff’s department in Indiana’s Madison County. His work in chaplaincy in the Anderson area helped pave the way for other local law enforcement chaplain ministries.

Don Billey, pastor of Main Street Church of God in Anderson since 2003, has also served as a chaplain for law enforcement in Anderson. Over the years, Don has appreciated greatly the exceptional example Benny Santiago has been to him and countless others.

“When people in Madison County here the word chaplain, Benny Santiago comes to mind,” Don explains. “Benny was passionate about the spiritual needs of both sides of the law enforcement coin: the officers and the offenders. Because of his background, he was especially focused on the offenders, and on introducing them to the love and hope found in the Person of Christ. He formed a great team of chaplains to work together with him in the county jail and in the juvenile justice program, where their main focus became the offenders. I was privileged to be a part of his team when I first arrived in Anderson in 2003, and served alongside Benny and other team members for three years before joining up with the Anderson Police Department as a part of their chaplaincy program.”

Don continues, “Benny was truly compassionate and offered love—sometimes tough love—to inmates, offenders, and those on the path toward trouble,” Don explains. “He pioneered prevention programs that were instrumental in steering young men and women away from the influences that would have led them into a lifestyle of crime. He is already missed, but his legacy lives on.”

Homegoing services in honor of Benny Santiago were held on January 15 at East Side Church of God in Anderson. Rev. Ragen Mitchell, pastor of Sherman Street Church of God, and Rev. Dr. Ed Foggs, general director emeritus of Church of God Ministries, officiated the service of reflection and tribute. Jim Lyon offered the following observations and reflections.

“In the quiet of the East Side Church of God sanctuary as a crowd gathers to honor Benny Santiago, one of ChoG’s best—and Anderson’s, too…. He passed away this week after an extraordinary life of redemption, ministry, and life-giving impacts everywhere he walked. A Jesus guy we all loved…. Benny’s pastoral, evangelistic, jail, drug recovery ministries, and more, touched thousands. He and I were both born when Truman was President. I could only hope of such reach for Jesus’ sake.”

Read Benny Santiago’s obituary at www.kellermortuary.com/benny-santiago. Learn more about chaplain ministry in the Church of God at www.jesusisthesubject.org/chaplains.

Feature (top) collage: Benny Santiago embraces Hattie Downer (left) at her 100th birthday celebration in 2014. Benny’s was one of countless lives changed because of the ministry of Hattie Downer. Photo credit: Richard LaGuerre. 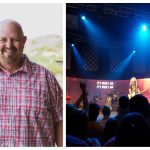 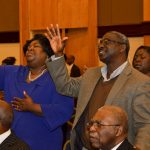