A Place of Prayer and Comfort at the Global Expo

By chogministries
Posted July 31, 2013
In All Church of God, Global Gathering, Global Strategy
A Place of Prayer and Comfort at the Global Expo2013-07-312013-07-31https://www.jesusisthesubject.org/wp-content/uploads/2016/07/ChogLogo-Light.svgChurch of God Ministrieshttps://www.jesusisthesubject.org/wp-content/uploads/2016/07/ChogLogo-Light.svg200px200px 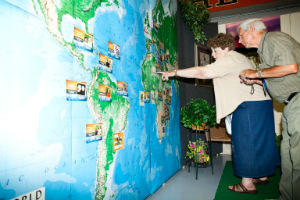 The Prayer Garden of the Global Expo was a place where God was experienced through prayer and meditation, with the opportunity to receive the body and blood of Jesus through the elements of Communion. There were many God-moments in that sacred space during the week. One amazing moment happened at the giant map of the world. The prayer cards of all of our missionaries had been placed on the map near the countries where they are serving.

A five- or six-year-old brother and sister were running back and forth from the map to the prayer altars that were there for personal prayer. Their mother came in to retrieve her children and insisted that it was time to leave. One of the children stopped and replied to her mother, “But, Mommy, we can’t come yet; we’re not through praying for all the missionaries!” They still had half the world of missionaries left to cover in prayer.

How awesome is it that these two children didn’t want to quit until they had mentioned each missionary personally in their prayers? Our missionaries were remembered in prayer by hundreds of others who visited this holy place of solitude. 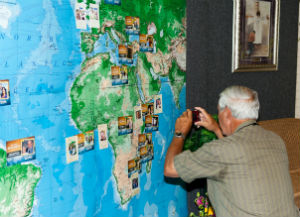 Another touching moment happened when an eighteen-year-old from Nebraska was in the prayer garden. She had come to Anderson with another family to attend Global Gathering. This young lady visited the very first evening to post a prayer on the Prayer Garden’s “wailing wall,” as she needed prayer for herself and a friend. After talking with her for a short time, it didn’t us take long to discover this young woman’s heart for God.

The second evening, she returned to the prayer garden—only this time I could tell that she was troubled in spirit. She wanted to post another prayer request to the “wailing wall” knowing that we would cover her petition with prayer that evening. This time I felt God leading me to take the time to pray with her before she left the prayer room. When I approached her, she poured out her heart as tears streamed down her face. She had just received word that her grandfather had passed away unexpectedly. Since she had come with another family for the Global Gathering event, there was no way that she would be able to return to Nebraska in time for her beloved grandfather’s funeral.

We sat and talked for awhile. I understood her grief since I had experienced something similar with my grandmother and was able to share that with her. I asked if I could pray with her. In that moment, the peace of God came over her and she became settled in her spirit. I will continue to pray for this young lady. I know the Lord will use this testimony as a reminder that he cares for those who are crushed in spirit. Praise God for this teenager who understands the power of prayer. Thank God for this place of prayer and comfort available during the Global Gathering.