A Movement on its Knees: Pastors Place Emphasis on Perennial Prayer

By chogministries
Posted May 5, 2022
In All Church of God, CHOG
A Movement on its Knees: Pastors Place Emphasis on Perennial Prayer2022-05-052022-05-05https://www.jesusisthesubject.org/wp-content/uploads/2016/07/ChogLogo-Light.svgChurch of God Ministrieshttps://www.jesusisthesubject.org/wp-content/uploads/2022/05/samuel-martins-3u7hcqkibb4-unsplash_adj.jpg200px200px

Not at all limited to Mother’s Day and Memorial Day, the month of May has become synonymous with numerous holidays and observances. The National Day of Prayer in the United States has certainly become one of the important times on the calendar when people from across the country set aside time to intercede specifically on behalf of the affairs of the nation and world. Each year Church of God leaders and laypeople participate in public prayer gatherings in ecclesiastical, educational, and civic settings. While special occasions for focused and collective prayer matter greatly, so too do the ongoing, day-in-and-day-out conversations with the One who hears and responds to our prayers. Amid crises and chaos spanning the globe, the Church of God is a movement on its knees, placing emphasis on the power and potential of perennial prayer.

Robin McCollough, a semi-retired pastor in Kansas, recalls fondly her days of tremendously meaningful ministry associated with the National Day of Prayer. Her congregation would meet annually on first Thursday of May to pray together and spend some time discussing the experience. Todd Braschler, known most broadly for his singing and speaking engagements, also recounts such experiences with appreciation. “I’ve been a part of the National Day of Prayer in my community for many years because it repositions the value of worship and prayer over and above denominations, traditions, and the burdens of our community.”

Indeed, prayer in the name of Jesus transcends the dividing lines of denominations. Prayer outside government buildings or around the flagpole in school settings have brought together, and continue to bring together, pastors and laypeople from churches known for a variety of names. But far beyond the National Day of Prayer, many Church of God leaders have organized or worked their way into ongoing involvement in prayer efforts supporting every aspect of society. Consider Joe Arena, for instance, whose prayer ministry has touched countless lives and surely affected change of many kinds. In an interview with Church of God Ministries a few years ago, Joe noted the following:

“The way we hear God’s voice individually and corporately is to really pray and seek his face for God to move in areas that only he can,” Joe explains. “I remember reading somewhere that you can do more than pray, but you can’t do more than pray until you’ve prayed!”

Determination of the 2022 theme for the National Day of Prayer was reached with inspiration drawn from Colossians 2:6–7. “Exalt the Lord who has established us,” became the tagline of choice. Ryan Chapman, a prayer warrior himself who serves as associate director of US-Canada Strategy for Church of God Ministries, has identified valuable resources to aid in observance of not only the National Day of Prayer, but prayer throughout the year. The “Seven Centers of Influence” in society is certainly among them: www.nationaldayofprayer.org/prayforamerica.

Jessica Hall, pastor of Beulah Church of God in Eubank, Kentucky, is a consistent voice in the advocacy of prayer. Oftentimes Christians like to pray for the members of the congregation the—the sick, the wayward, the troubled—but sometimes the nation is seen as “going to hell in a handbasket” and perhaps beyond recovery—yet Jessica knows prayer suggests otherwise.

“Our prayers can make a difference in our nation!” Pastor Jessica insists. “But it has to happen on personal level. When we saturate ourselves in prayer it changes the fabric of our lives, the fabric of our churches, and then pours out to change the fabric of the communities we live in and serve in.”

With that kind of endorsement—perhaps admonishment—it’s time for the Church of God to rise up (kneel down, of course) and “take it to the Lord in prayer.”

For more information about the National Day of Prayer in the United States, visit www.nationaldayofprayer.org.

Learn more about the Church of God movement at a www.JesusIsTheSubject.org. 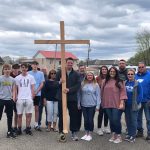 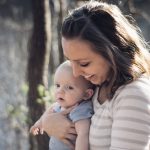 Baby Dedication and the Heart of a MotherAll Church of God, CHOG