A Glimmer of Hope in the United Kingdom

By chogministries
Posted June 13, 2017
In All Church of God, Global Strategy
A Glimmer of Hope in the United Kingdom2017-06-132017-06-13https://www.jesusisthesubject.org/wp-content/uploads/2016/07/ChogLogo-Light.svgChurch of God Ministrieshttps://www.jesusisthesubject.org/wp-content/uploads/2016/07/ChogLogo-Light.svg200px200px

Hope is at a premium in the United Kingdom. Recent terrorist attacks have ignited fears among many, but desperate poverty has been widespread in parts of the country for years. The city of Birkenhead, 227 miles northwest of London, exemplifies a post-Christian culture where the traditional role of church in society seems to have disappeared. Though just across the river sits the affluent city of Liverpool, Birkenhead faces all the usual struggles of a city stigmatized by economic decline and rampant unemployment. In the midst of this dark environment, Egan Road Church of God has been a constant glimmer of hope for ninety years. Today, Global Strategy missionaries Zach and Audrey Langford lead the congregation, now positioned to reach the community—including, and especially, the younger generation.

Personal experience played a huge role in bringing Zach and Audrey to England. For Zach, finding hope, while struggling with a difficult situation at home, demonstrated the potential influence of the church on young people. After becoming angry with God, Zach met a few guys who connected him to the youth group at Sixth Avenue Church of God in in Decatur, Alabama, where Ken Oldham—current Global Strategy pastor to Egypt—was serving. “They took me in, and it was there that I experienced true friendship and ultimately God’s love,” Zach recounts. It was also at Sixth Avenue Church of God where Zach would decide to go on his first mission trip.

Cross-cultural life wasn’t anything new to Audrey. She experienced life in a variety of locations abroad during her most formative years. Not only did she learn to adapt quickly to cultural differences, but she also developed a curiosity that would lead her to accept several short-term mission assignments. It was during this time that God broadened her perspective and opened her eyes, not only to the economic poverty outside of the United States, but also the spiritual poverty.

Fast-forward to 2011. The median age of the congregation at Egan Road was steadily climbing with no indication that the trend would change. Former missionaries Dave and Kathy Simpson offered the church a consultation and, over the next six years, the church began to intentionally connect with young people. Issuing a challenge to the church to invest in the younger generation, Pastor John Pemberton expressed his willingness to pass the torch of congregational leadership to someone who could better realize this new vision. Last year, the church voted unanimously to reorient their mission. Zach and Audrey Langford were installed as missionary pastors on Easter. 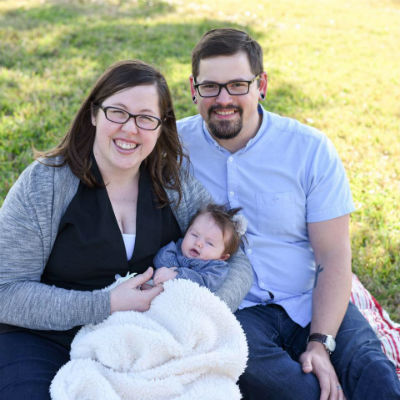 “I believe the desire to invest in youth and young adults is at the center of most churches,” Zach explains, “but it’s the lack of motivation and execution that hangs churches up. Fortunately, Egan Road was able to see and experience the importance of investing in young people before it was too late. Our desire is to honor the older congregation by showing that their years of faithfulness are being realized as young people become more active in the church.”

When Western society thinks of the mission field, it often imagines remote villages separated by dirt roads with mud-roof houses on either side. They don’t often think of developed countries like the United Kingdom. Most, however, cannot fathom the combination of material and spiritual destitution in places the media never spotlights and vacationers simply avoid. “Our desire is to see people come to faith in Jesus Christ; whether that is in a remote village or in the urban setting,” Zach explains. “Sometimes it is difficult to see the need if there isn’t an outward physical distress, but even in ‘wealthy’ nations there are individuals that slip through the cracks, and there are always marginalized people and communities. The community surrounding the church is one of three of the most deprived in all of England, so the physical aspect is, in fact, very much present.”

Spiritual and material deprivation, a post-Christian society, and a lack of young disciples; the Langfords have their work cut out for them. Audrey explains, “England and all of Europe are in a state of disinterest or fear toward religious ideas. People see the church as divisive or judgmental, rather than good news. We therefore must share the gospel, not only in word and in a church building, but demonstrated in action, in care, and in everyday conversation.”

Recently, two Egan Road families came to worship with three generations represented. Zach and Audrey see it as a glimpse of good things to come.

“It is often difficult to communicate biblical or even spiritual principles to non-believers in this context,” Zach adds. “However, extending grace though your own life experiences and vulnerabilities translates much easier. The anger I felt growing up in a single-parent home, having very little contact with the other parent, is something experienced by nine out of every ten young people we encounter. We all have to remember that our greatest weakness, regret, or struggle can be the thing that God uses to change hearts.”

Learn more about the Langfords and discover how you can support them at www.chogglobal.org.