A Conversation with the Man Behind 70,000 Church Plants

By chogministries
Posted June 16, 2014
In All Church of God, CBH: Christians Broadcasting Hope
A Conversation with the Man Behind 70,000 Church Plants2014-06-162014-06-16https://www.jesusisthesubject.org/wp-content/uploads/2016/07/ChogLogo-Light.svgChurch of God Ministrieshttps://www.jesusisthesubject.org/wp-content/uploads/2016/07/ChogLogo-Light.svg200px200px 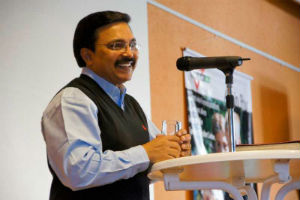 1.2 billion people live in India. Among the vast range of needs in this massive country, there are very few that differ from other locations around the world. Yet the unique culture and diversity of language and landscape make India a truly one-of-a-kind place. There are sixteen major languages spoken by at least ten million people each. The predominant religion is Hinduism, but Islam’s influence is growing rapidly. Yet ringing through the noise of political and religious disunity, there is a gospel of hope and peace in Jesus Christ. Through the leadership of Samuel Stephens, God has planted some seventy thousand new churches—most in regions where the gospel had never been preached. In May 2014, this Indians leader paid a visit to the United States. While here, he spent some time with Jim Lyon and discussed life and ministry matters.

Listen to Jim Lyon and Samuel Stephens discuss life, politics, faith, and ministry as recorded for the broadcast of CBH ViewPoint in early June 2014. For Part 2, click here. Visit www.cbhviewpoint.org for subsequent broadcasts with Samuel Stephens in the series.