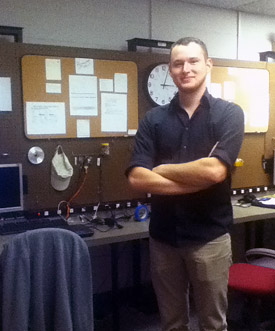 Deep in the halls of the ITS offices in the bottom of Decker Hall sits Daniel Whatley, a new face to the Anderson University staff as the office’s newest network and desktop specialist. Whatley recently finished his senior year of college as a Bible and religion major. However, he is finishing a few more classes so he can also obtain a computer science degree. Combine the classes with his full-time job and Whatley is a man constantly on the go, but he is also a success story, after the odds were stacked against him before he even began his freshman year at AU.

Whatley made the grades in high school, but he found he needed a little extra push to teach him better study habits. He enrolled in the Alpha program at AU, which includes a one-semester class taken during the freshman year focused on good study habits and basic skills needed to make it through college.

“The program helped me attain the study skills I needed to make it through, and from there I took the classes I needed to take and Dianna Stankiewicz kept an eye on me the rest of the way,” said Whatley.

Stankiewicz, the director of learning assistance programs in the Kissinger Learning Center, was Whatley’s professor in the study strategies class and has continued to encourage him through the years.

Things have changed for Whatley, as he now holds a full-time job and finishes up his college classes. Nearly four years removed from his freshman year at AU, he can step back and reflect on the success he had, despite needing that extra push at the beginning. Whatley is a success story, but he does not take it for granted. This fall, he spoke to incoming students who are enrolled in the same program he was.

“My freshman year, there were quite a few people who started out in the class, but there weren’t many by the end,” Whatley said. “I told the students if they apply themselves then they can succeed at just about anything. It was really cool to encourage all of those students and just say ‘Hey look, I’m an example that this can work.’”

Working in IT was something Whatley had wanted to do, and he is now living that dream, helping AU students get logged on to the Internet and helping computer users with various problems. By the end of this year, Whatley will have completed his computer science major, and then his focus will turn solely to his work.

“This is a really good job to have right out of school, and the responsibility that’s put on me is a good thing for this career,” Whatley said.