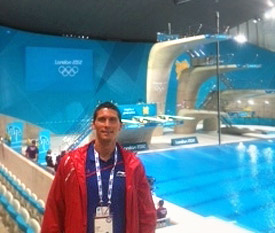 When Clark Scott found the small, Christian environment he had been looking for at Anderson University, he never anticipated being able to experience a worldwide event like the Olympics. Scott, a 1998 graduate of AU and current owner of a chiropractic practice, spent three weeks in London working with the U.S. Olympic Diving Team during the 2012 Olympic Games. Scott spent his first competition with the U.S. Olympic Diving Team in Canada in 2010.

“One of the things on my bucket list was to go the Olympics at some point,” said Scott.

Scott came to Anderson University after growing up in Central Indiana and being raised in a Church of God family. Although he knew he wanted to major in athletic training, he was unsure where that path might take him. “I had a love for sports and for helping people, but I didn’t really know where I was going,” said Scott.

Fortunately, Professor Steve Risinger, director of sports medicine and head athletic trainer, had a vision for Scott’s future. “Doc [Risinger] knew I wasn’t going to be in a traditional role, so he let me do my senior internship with a massage therapist, which was kind of unheard of at the time,” recalled Scott. Although he did not go to chiropractic school right away, it was this internship that made Scott consider the field.

Risinger makes it a priority to get each sports medicine student onto the field and engaged in experiential learning as quickly as possible. “He really cares about you and wants to develop you as a trainer,” said Scott.

After graduation, Scott went to massage therapy school and began working as both a massage therapist and an athletic trainer. A few years into his career, he decided to go to chiropractic school; Scott’s chiropractic practice celebrated its fifth anniversary in September.

A friend who had attended massage school with Scott had worked with the divers in Beijing in 2008. When their paths crossed again after the 2008 Olympic Games, Scott offered his friend a job in his practice. The friend introduced Scott to the diving coach, and their relationship grew from there.

In London, Scott worked out of an external medical hub, and divers would make appointments to see him. “A big part of what opened the door for me working with the team was my education from AU,” said Scott. While he was able to treat using chiropractic practices, he was required to travel as an athletic trainer. Multiple credentials allowed him to be present to help the divers.

“Although we did all the fun team activities, I was there for the competitions,” said Scott. “To see them do as well as they did was really cool.”

On working with diver David Boudia, a local Olympian from Noblesville, Ind., who earned a gold medal in men’s platform diving, Scott said, “I was a small piece of the puzzle that helped this guy be the best diver in the world.”

Courtney Hoyle is a senior from Munster, Ind., majoring in marketing and minoring in public relations. Hoyle is an associate with Fifth Street Communications®, writing on behalf of the Anderson University Office of University Communications.