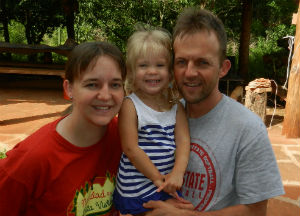 The truck driver who caused a fatal accident on April 18, 2012, which took the lives of missionary Julie Beam Kurrle and her six-year-old son Timmy has offered compensation to Rev. Norberto Kurrle, husband and father of the victims.

The offer comes after a forensic investigation into the accident, concluded on October 17 in Encarnación, Paraguay, by police and public prosecutors. A meticulous reconstruction of events placed blame for the accident on Mariano Ramón González Dominguez. The Kurrle family’s car crashed into González Dominguez’s cargo truck in the predawn darkness that morning.

The District Attorney’s office of Coronel Bogado has charged González Dominguez with leaving his vehicle parked illegally in the traffic lane of Route 1, a major Paraguayan highway, without lights or reflectors to warn passing motorists.

Furthermore, the investigation revealed González Dominguez had left the truck in that position for some time before the accident occurred while he attempted to clean a dirty fuel filter that had caused the engine to stall. Two witnesses came forward to confirm this to investigators, stating they had narrowly avoided collision with the heavily loaded truck minutes before the fatal accident.

The evidence contradicts statements that González Dominguez gave to police at the scene of the accident. The driver alleged his vehicle was moving along Route 1 when the Toyota station wagon driven by Rev. Kurrle tried to pass. According to the driver, another vehicle pulled into the roadway, and when Kurrle swerved to avoid it, he crashed into the slower moving truck.

Within hours, a major Paraguayan news outlet published this version on its website, www.ultimahora.com, causing considerable anguish within the international community of the Church of God, obviously due to the tragic loss of Julie and Timmy Kurrle, but also because of the insinuation that Norberto Kurrle was responsible for causing the accident.

“I did not realize there was a truck there until the instant of impact,” Kurrle said. “Another truck was coming toward us and his headlights temporarily blinded me. I recall lowering my own headlights and the next second we crashed against an immovable object.”

When questioned by police on April 18 regarding the speed he was traveling, Kurrle, still reeling from shock and grief, responded, “I don’t remember, maybe 100 Km. per hour [60 mph],” the legal speed limit on Route 1.

Officers then informed him that the speed limit on Route 1 drops to 80 Km. (50 mph.) at night. The District Attorney indictment acknowledges that this could have been a secondary factor in the accident, however “we arrive at the unmistakable conviction, that the conduct of Mr. Mariano Ramón González Dominguez was PREPONDERANT (sic)…in producing the consequence.”

The legal document goes on to state, “If Mariano Ramón González Dominguez had respected the requirements pertaining to the proper illumination of his vehicle or placed the mandatory warning reflectors used in cases of breakdown or emergency when these circumstances occur in a traffic lane, this outcome would not have been produced.”

For his part, Norberto Kurrle is not seeking punitive damages against the professional truck driver, affirming that vengeance is not on the agenda of a child of God.

“I’m only interested in an apology from him or the trucking company which owns the truck,” he said.

“Of course, nothing can restore Julie and Timmy to us. But I think it is just that they compensate me for the loss of our automobile and for the legal costs that I have incurred.”

“I am grateful to the entire family of God for interceding in favor of a speedy resolution to the judicial process,” he added.