Black History Month: A Celebration for All People

By chogministries
Posted February 20, 2012
In All Church of God
Black History Month: A Celebration for All People2012-02-202012-02-20https://www.jesusisthesubject.org/wp-content/uploads/2016/07/ChogLogo-Light.svgChurch of God Ministrieshttps://www.jesusisthesubject.org/wp-content/uploads/2016/07/ChogLogo-Light.svg200px200px 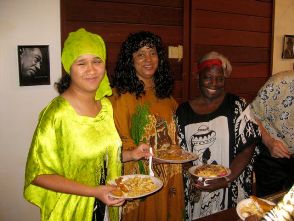 Picture a room filled with spirited praise—hands lifted, voices raised in gospel accord, and you’ve got a sense of a typical worship service in congregations such as Martin Street Church of God in Atlanta, Georgia. Throw in choirs, guest speakers, skits, liturgical movement, and a community feast, and you’ve got a sense of the month of February in many of our Church of God congregations. During February—Black History Month—expect lively celebration, tender reflection, and joyful thanksgiving that only firsthand experience can truly describe.

Martin Street Church of God has a long history of commemorating the contribution of blacks to society. This year, Bill Dennis, music director, explains that this year the church celebrated Black History Month by involving the children in a variety of skits which dramatically portray African American individuals who have had great success as inventors, scientists, sports icons, church leaders, and so on. 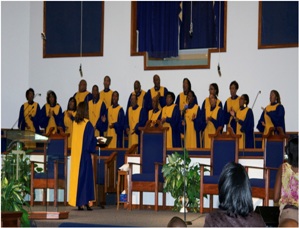 Gail Carter, minister at several Church of God congregations in Arizona over the years, recalls the Black History Month celebrations held at Central Phoenix Church of God. “We dressed in African American garb. There were special dinners and plenty of soul food, songs, and one family in the church brought African dance and songs to deliver.” Central Phoenix Church of God was composed of multiple cultures, so one year, as Gail recalls, the pastor organized “an international dinner during Black History Month to include everyone. Whatever background you were, you brought in dishes from your own heritage.”

Worship services during the month of February at Central Phoenix Church of God were intentionally planned to highlight a specific period of black history. From spirituals to gospel praise, from the classic “Swing Low, Sweet Chariot” to the Brooklyn Tabernacle Choir’s “In the Name of Jesus,” the whole spectrum of African American music was covered.

Why is it so important that Black History Month be observed? Like the Jewish holocaust, Gail emphasizes the importance of remembering the facts of the past to prevent history from repeating itself. “They say if you don’t remember it and warn people, it could happen again.” African Americans have made major contributions to the church and culture, yet history books and common knowledge often leave this truth overlooked. For African Americans in the Church of God, observance of Black History Month is not just an opportunity for worship and celebration, but also for education. 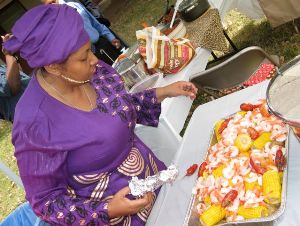 What about predominantly white congregations? How might they honor the contribution of blacks to the church and culture? “Look up information about the contribution of blacks in America through history up until today,” Bill suggests. “Often we miss blacks’ contribution from many years ago. For example, black man created the stop light system. Little things that we take for granted, blacks have had an important contribution in. Try researching black history and let that be a starting point.” Gail adds that churches can schedule guest African American speakers, choirs, and show tangible expressions love to blacks in their community.

The Church of God at its ideal has purposed to see the walls of division between cultures crumble. Gail believes the message of the Church of God has been important to blacks. “The message of personal holiness, unity, and love should bind us together. It all boils down to the heart.”