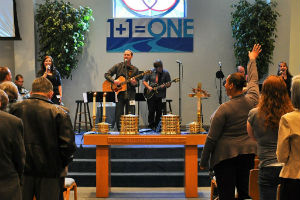 Just outside Houston is the city of Pasadena, Texas. When one of its churches faced a difficult decision about their future, instead of folding or relocating, they chose to merge with another.

“There’s an independent church in town with roots in the Church of Christ,” Jim Feirtag, pastor of Parkgate Church of God, explains, “but their pastor and I are very good friends. Our churches had done a lot together over the years, including different service projects in the community and men’s and women’s retreats.” The two pastors, as well as several other pastors in town, meet together for fellowship each week.

“As much as their church tried to reach the neighborhood, it became very difficult. Almost overnight, their church became a drive-in congregation.” For the independent church, the question was whether or not to sell their building, purchase a new building, or rent a school. “As the pastor and I talked,” Feirtag continues, “we began to think about what it would be like if we pooled our resources.” 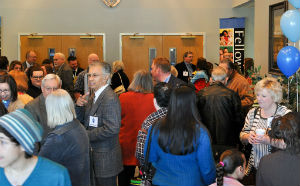 The two churches had no theological incompatibility, so the conversations expanded to include the church leaders and laypeople. In November, the churches announced their plans. They began pulpit and worship leadership exchanges, held joint fellowship activities, and combined youth events. “They basically came to us with a no-strings-attached offer. They just wanted to be a part of our ministry. It was not that there was one congregation that was drowning and the other had to come to the rescue; rather, both congregations decided that we could do a whole lot more together for the gospel than apart.” In January, Parkgate voted almost unanimously to complete the merger.

On the first Sunday of March, the two churches held their first service as one community of faith. Parkgate’s attendance hovered at two hundred before the merger. On Sunday, over three hundred showed up. Past members of each church who had left at one time or another returned to the fellowship that day. Several visitors also came to see what the hubbub was about. The service was especially celebratory and resulted in setting various goals for the new church to make an impact on the city of Pasadena. To help reach these new goals, the church made a big push for volunteers. Many signed up who have never been involved in the work of the church. Some of these volunteers were recruited to help with parking.

“We have to have a parking lot crew now, because we don’t have enough parking spaces,” Feirtag says. He chuckles and admits that this is a good problem to have. “I grew up in the Church of God,” he continues. “We heard, ‘We reach our hands in fellowship to every blood-washed one’ so many times. What we’re doing now is putting our rhetoric into action. Are we really willing to surrender our personal preferences so that we can partner together for the gospel?”

The newly merged congregation anticipates an upcoming opportunity when the other building sells. “We’ll have plenty of resources to expand our ministry debt-free. And we won’t have to maintain two buildings. Usually churches wait until they’re down to a few people before considering opportunities like ours. If more took advantage of this kind of thing while there is vitality remaining, there could be real kingdom impact.”

So what about the nuts and bolts of this merger? Feirtag is the senior pastor, and the pastor of the independent church became the associate of outreach and discipleship. Parkgate’s youth pastor remains responsible for youth ministry, and the youth pastor of the former church (who is gifted in children’s leadership) has become the children’s pastor. The worship leadership at the former church was made up of several volunteers, so the worship leader at Parkgate now has a bigger team of talent.

“Our whole focus for the rest of the year,” Feirtag explains, “centers on two things: becoming one spiritual family and carrying out the Great Commission. We will eradicate the former ties to the old congregations to the point that members do not feel they need to identify themselves as having come from one group or the other. Each month, we will function as one church as we do service projects to reach the community with the love of Christ.”